Not Jarvis, but His Real Son. I guess he can be considered Jarvis's Brother :D 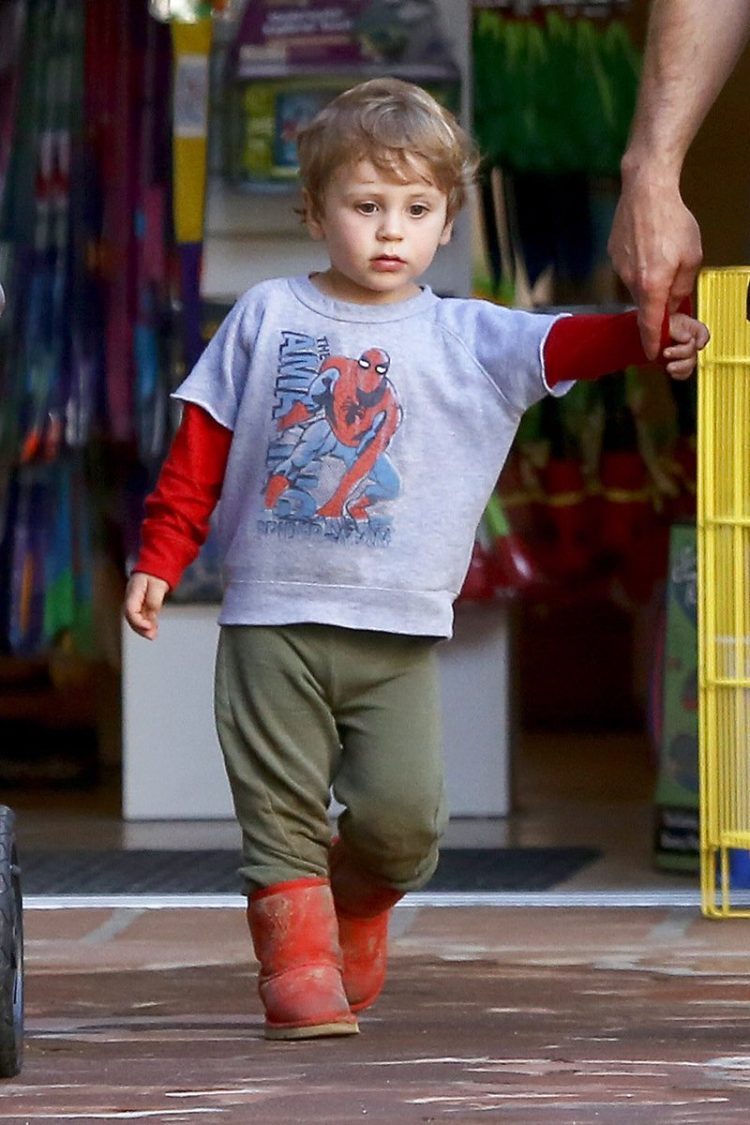 Exton Elias Downey is Robert Downey Junior’s son. He was born on 7th February 2012. He is the first son of his second wife, Susan Nicole. Exton Downey has gained a huge fan base because of his cuteness and father’s presence in the film industry.

The Young Lad is only ten years old. It would be very soon for his early life description; although we have a few facts for the same, it would not account for anything specific because his life has just started, and he is all set to create wonders in the field he wishes to choose.

He was born at sharp 7:24 A.M and was a healthy baby that weighed more than 7 pounds and 5 ounces at birth. Exton has a brother named Indio Falconer Downey and a sister named Avri Roel Downey.

All of Robert Downey Junior’s kids are their father’s biggest fans, and they also show off their father at school and family events.

Sure it does feel good to have an IRON MAN as your father. This is every marvel fan’s dream. Imagine having Iron man even closely related to you or your existence.

Exton Elias Downey is also a big fan of Robert Downey Junior’s co-stars, including Tom Holland, Chris Pratt, and Benedict Cumberbatch. He has immense love for Spiderman and Dr. Strange, mainly because it has a multi-verse angle. Could this be the birth of another Marvel Superhero?

Family of a Star

Robert Downey Junior is undoubtedly one of the most loved and famous Hollywood stars. He was born on April 4, 1965, in New York. As of now, the actor is 57 years old. Of course, Robert Downey Junior is widely known for his work, but the star has a perfect image of having fun and lifting the room, and everyone is present in the arena.

Although Robert Downey Junior has achieved great heights and respect, his story has a dark side.

Not very long ago, he was drowned in the dark world of drugs and was sinking even deeper day by day. Robert got no work and was practically unhirable because of his drug problems.

Robert Downey’s childhood wasn’t as peaceful and happy as it is for most people. Robert was born in Ney York. His father Robert Downey Sr, an underground filmmaker was drenched in doing drugs. Moreover, he was the one who introduced drugs to Robert Downey Jr at the age of 8.

Robert Downey explained how he and his father found their peace in doing drugs. It became their most prominent activity when it comes to hanging out together. The father-son relationship was dependent on that only. Furthermore, he also revealed that most of the time in his 20s and 30s was spent on drugs and getting involved in illegal whereabouts.
As a result, he was sent to a rehabilitation center multiple times.

Exton Elias Downey’s mother, Susan Levin, was born on November 6, 1973. She is 48 years old as of now. Susan is a movie producer, but she has gained more popularity because of her marriage to Robert Downey Jr. She is also the co-founder of the production house “Team Downey.”

Susan Downey is the co-founder of her husband. Previously, she did work as the Executive Vice President of Production at Silver Pictures alongside Co-President at Dark Castle Entertainment.

As a producer, Susan has left good impressions on some famous movies like ‘Due Date,’ ‘Iron Man 2,’ ‘Sherlock Holmes: A Game of Shadows,’ and ‘The Judge.’ Currently, she is a movie producer, and her husband, Robert Downey and raising two children in a happy and prosperous family.

Exton’s Elias Downey’s parents married each other in 2005.

Susan Levin met Downey in 2003 during the production of her film “Gothika.” She was working as an Executive Vice President at Joel Silver’s movie. In a 2009 interview with Harper’s Bazaar, she exposed that she wasn’t initially interested in him.

But eventually, things worked for them, and she brought very significant and positive changes to his life.

Finally, she offered him an ultimatum: either change the drug addiction pattern he is on, or things between them will end. Robert threw his drugs in the drain after deciding to be with her forever and for the better.

They have been happily married for more than 15 years and have two beautiful children. She and her husband kept growing closer, as did she and her stepson with her.

At first, the pair dated discretely. But after dating for about a year, They both decided to get married in an Amagansett, New York, Jewish ceremony on August 27, 2005.

Their wedding pictures show their happy faces in the union, are all set to live a happy married life.

Susan wore a beautiful V-neck silk gown accompanied by a long veil, whereas Robert was himself as usual, but he wore a classy tuxedo with a purple scarf.

Exton Elias Downey is born into a self-sufficient and reliable family. He has his future secure because of his father and his wealth. But it will be exciting to watch the young star grow and create wonders even more than his father, Robert Downey Jr.

But Robert said that there would be no pressure from the family, that Exton Elias Downey would decide what he wanted to be in his life.