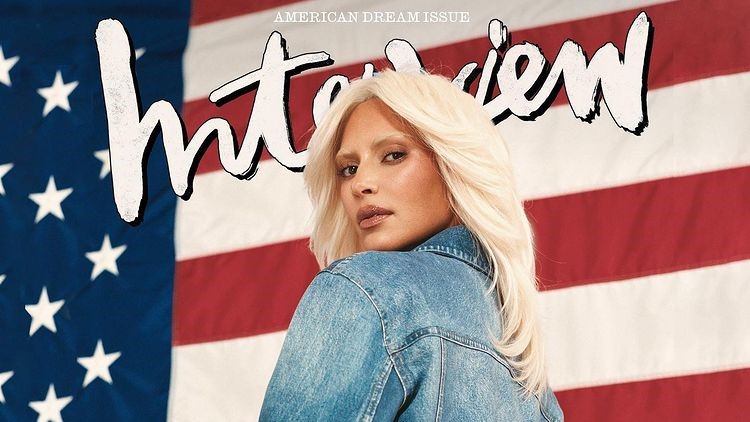 Kim Kardashian, a socialite, and businesswoman from the United States is once again shattering the internet.

Kim is baring it once more in a new photoshoot for Interview magazine, years after going naked for an iconic Paper magazine cover.

For the new September edition of Interview magazine, the 41-year-old reality TV personality and millionaire cosmetics and lingerie entrepreneur exposed her booty in front of the American flag.

Kim Kardashian is elevating the basic jockstrap to the status of a seductive, high-fashion item.

The Keeping Up With the Kardashians star posted photos from the magazine session to her Instagram page and appeared to have changed into a whole different person.

Kim donned a jockstrap with denim pants, bleached eyebrows, and blonde hair for the cover of the latest issue, which is titled the American Dream.

Kim Kardashian released images from the September issue of the Interview magazine on Tuesday (IST). The diva is seen on the front cover wearing only denim, with her pants pushed down low enough to reveal her notorious jockstrap.

The outfit is from Bottega Veneta. In addition to having platinum blonde hair for the Marilyn Monroe moment at the Met Gala, Kim debuted bleached eyebrows for the now-viral photo session.

Kim is seen in an all-denim outfit on the cover, baring her bottom, but in another photo, she is wearing a cropped tank top, a jockstrap, and a pair of bright orange baggy pants. Kim also forwent wearing trousers and posed in a loose T-shirt for another photograph.

Other pictures include her posing in front of the American flag while sporting a black leather jacket, bikini bottoms, and bleached brows, and blonde hair. She is also wearing a tank top and low-waisted baggy denim trousers.

Kim acknowledged that her look is appealing and realistic. She said to the journal, “Oh my gosh, there are so many people I can’t even count them all. I adore their attire. I also adore that. That’s really new.

I got it. And then I can discover things that are really marketable, maybe so straightforward, and that so many people, particularly females, can relate to.

I feel realistic about what I’m wearing. It’s simple to locate a comparable item or a means to wear something comparable, and I believe that may be the reason it resonates. It appears achievable.”

For more exciting and interesting news articles feel free to check out the USA periodical.