Influential Canadian Actor and Singer known for his notable works in the music & the acting worlds. 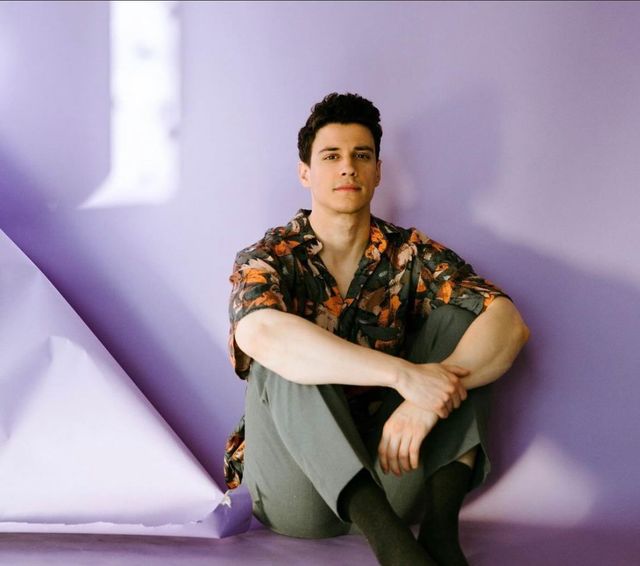 Adam DiMarco is a well-known Canadian Actor and Singer known for his work in The Order, The Magicians, Zapped, Radio Rebel, and Kill For Me. He is also credited as the Injured Red Shirt.

DiMarco made his mark with his remarkable performance through his acting in Television and Films. Now, he is all set to make an impact with his singing talent and make his presence in the world of music under the project Good One.

Let’s look at a glimpse and a Closer look at his life!

Adam DiMarco was born on 14 April 1990 in Oakville, Ontario, Canada. The information regarding her parents and family background is still unknown and not disclosed. When it comes to personal details, Adam is quite secretive and introverted. He stays away from the limelight and media attention.

He has two siblings, an older brother Michael and a younger sister, Tausha. He spent his childhood in Oakville but later moved to Vancouver for higher education. No other information and details about his family are available.

Adam DiMarco studied life sciences in high school. He graduated from the University in Canada. He can speak German and Spanish apart from his Native English Language. He has grown up playing Piano.

Adam DiMarco began his acting career in 2010 with a Short Comedy, Fourth Date, and later in another Short Comedy, Lotus Eaters. He later made a debut on the big screen with the film Do Something With Your Life, a feature film in 2011, and Gay Dude in 2012.

He is famous for the role of Gavin Morgan in Radio Rebel, a Disney Channel Original Movies in 2012. He simultaneously made two cameo roles in RL Stine’s The Haunting Hour in 2011 and 2012. Adam also played a supporting role in the movie Kiss At Pine Lake, a romantic drama in the same year, 2012. Also, he played a minor role in A Killer Among Us, a crime thriller, in 2012.

In January 2012, he portrayed the character of Kirby Nystoruk in the Series Arctic Air, an adventure drama. Later in 2013, he starred in Kill For Me opposite Kattie Cassidy. He also made a guest appearance in the series Supernatural in 2013.

Later in 2014, Adam Dimarco starred in the romantic comedy Date and Switch, opposite Dakota Johnson and Gary Cole. In the same year, 2014, he appeared in Zapped, a Disney Channel Comedy.

In 2014, he starred as one of the leads in Girl House, a Horror Thriller. He was featured in the Oscar-Nominated Sci-fi movie Star Trek Beyond in 2016. He appeared in the film Secret Millionaire in 2018.

The role of Todd in the movie The Magician was a giant leap in his stardom. Later, he was featured in the Netflix original series, The Order in 2019.

Adam is also a singer and musician. He was featured on the Radio Rebel-Unuberhorbar, with the songs Turn It All Around, We So Fly, and  Now I Can Be The Real Me.

The Net Worth of Adam DiMarco is estimated to be around $1 Million. His primary source of income is through his acting, singing, brand endorsements, and social media. He earns $5k-$6k per episode.

He lives a luxurious and decent life with his family. He enjoys each and every moment of his life.

Adam is a talented and creative artist. Here are a few of his brilliant and famous works, from which he earned immense popularity and appreciation.

Adam DiMarco is an art lover. He often visits Museums, Art galleries while he travels. He began to start his own art collection. He is talented, skilled, and creative. He also enjoys traveling to different destinations.

Adam is a big fan of hip-hop music. Kanye West is one of his favorites. Also, he loves to play video games as his pastime. He is very hardworking and dedicated to his career.

Adam is socially very active on platforms such as Instagram and Twitter. He connects and interacts with his fan following. He regularly posts his beautiful pictures, videos, and travel content on social media.

No more official accounts are available on any social media platforms.

Adam DiMarco is a Canadian Actor and Singer. He is a well-known celebrity in the Entertainment Industry. Also, he is known for his prominent work in Films and Television. He has a pretty huge fan following. Also, the young star is much appreciated and praised for his acting and music skills. He is creative and skilled in his craft.