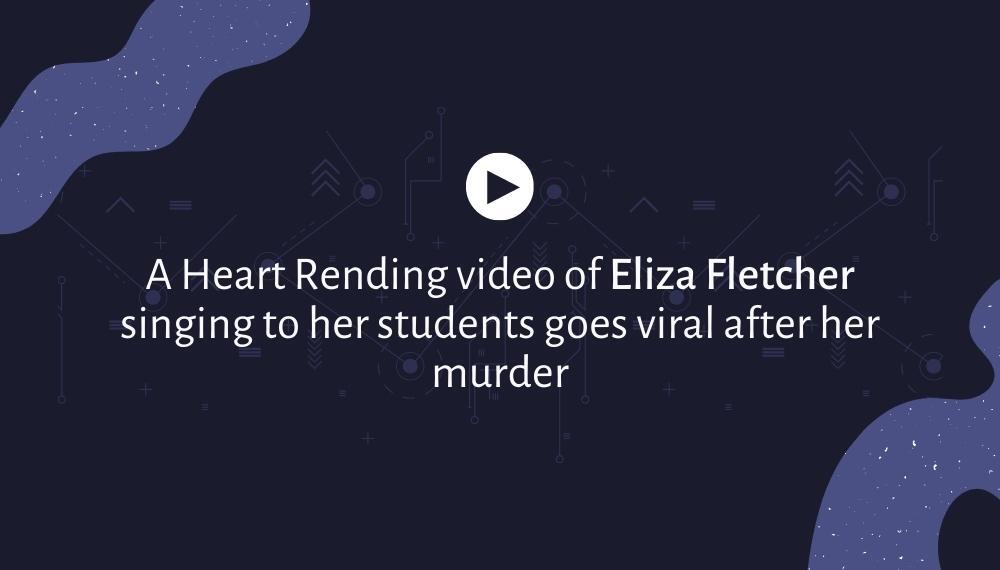 Eliza Fletcher was a teacher in Memphis, Tennessee, who has been in the news recently because of her murder. Now, a moving video of Eliza Fletcher performing to her students before she was killed goes viral. The video has been shared by the author Ryan James Girdusky in which Eliza Fletcher is singing Harry Dixon Loes’s “This Little Light of Mine” and convinces the students to join her in singing.

What a beautiful person, a school teacher singing to her students.

Eliza Fletcher was killed by a career criminal. Lives like hers are lost because we care more about criminals than law abiding citizens.
pic.twitter.com/hdVAXSJGDB

According to the recent news, On Friday, September 2, at around 4.30 am, 34-year-old Eliza Fletcher was out for a morning jog when she vanished. After that, officers launched a four-day search that took them to several wooded areas all across Memphis. On Monday, September 5, the Memphis Police department discovered Eliza Fletcher’s body outside a vacant duplex house in South Memphis, bringing the kidnapping of the kindergarten teacher in Memphis to a horrific conclusion.

A tweet regarding finding the body has also been shared by the Memphis Police Department. About 100 yards away from the Longview Gardens apartment building, the body was discovered. Cleotha Abston, 38 years old, was later detained and accused of particularly aggravated abduction and tampering with evidence and violently kidnapping Eliza.

On the viral footage of the slain kindergarten teacher Eliza Fletcher, a user wrote in the comments, “Her sweet children won’t get to know their Mommy in the flesh, no more hugs, kisses,” another user commented, “I am sickened to think of her last moments.” Citizens are very disappointed and in shock because of this event. A user wrote, “Sadly, Americans care more about the billion dollar prison industry than it does about fixing & preventing career criminals.”

Eliza fought back as her kidnapper and alleged murderer dragged her in the passenger side of his car. She fought for her life but was overpowered by this career criminal.

He had only been released in 2020 after serving 20 years in prison for kidnapping. pic.twitter.com/Ub6xDu1LwG

Other than this, author Ryan James Girdusky also shared another post on his Twitter account with the picture of the alleged murderer of Eliza Fletcher. Besides, an initiative has also been taken to honor the life of Eliza Fletcher by organizing a fundraiser marathon.

Great news – we’ve already surpassed my original goal of $250, so I’ve doubled it! Please keep giving. This is the Memphis I know and 💕 pic.twitter.com/ka5MtOLijb

For more information related to viral, influencers, and celebrities, visit our website www.usaperiodical.com.