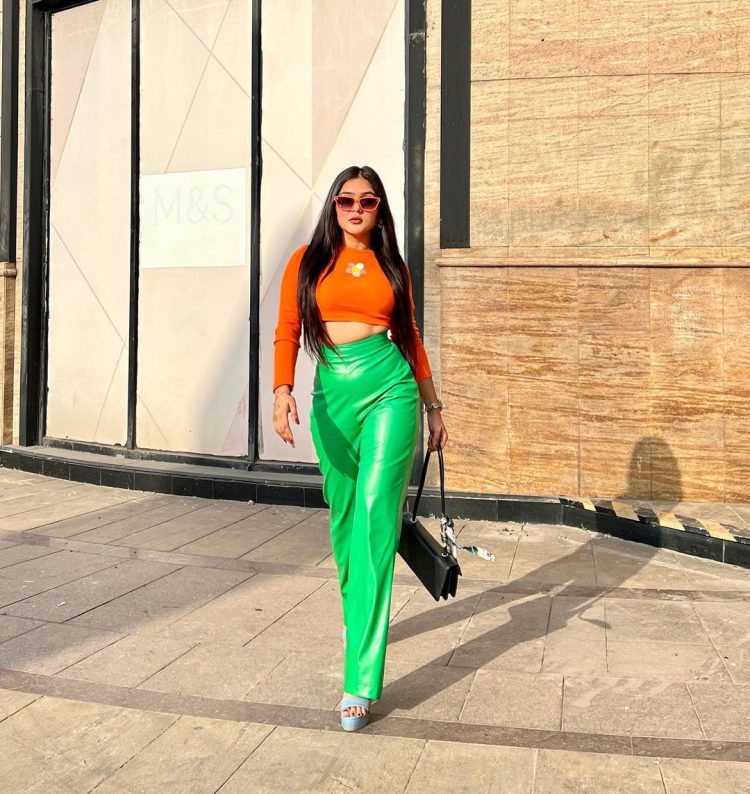 Khushi Karki is one of the new-age Instagram stars, models, and content creators who set the trends and lead them with their creativity. She is famous for her charming personality and fun and creative reels on Instagram. Moreover, she is also a professional model who engages and collaborates with brands in the real and virtual world.

Apart from Instagram, Khushi also manages a youtube channel posting content videos. She is not only a new-age star but has also been spotted in a handful of Punjabi and Haryanvi music videos, web series, and short films paving her way through an acting career.

Khushi Karki was born in Haldwani, Uttarakhand, India on 24th September 2000. She was also brought up in Haldwani and attended high school at K.V.M Public school. She has pursued her graduation bachelor of arts from LBS government degree college, Haldwani. She is a daughter of Varun and Manisha Karki and has a sibling sister named Anuradha Karki who has often been spotted in her videos.

Ms. Karki is an established and professional model and Instagram influencer. She has worked alongside many brands and has endorsed several products. Apart from her gorgeous posts, her Instagram reels video catches the audience’s attention and helps her set a trending format. She also won Celebrity Face Star Season 01 in the year 2021. Almost all of her music videos have crossed a million views on social making her a newborn star in the industry.

Her Career and Net worth

Khushi is a full-time content creator and a professional model. She began paving her career by making lip-synced content from TikTok.It was in 2018 that she got TikTok fame and gained a remarkable number of followers. She has also appeared in several music videos, web series, and short films and continues to grow her career through modeling and content creation.

Karki’s income source is her modeling career, her Youtube channel, and her collaborations with brands. She has an estimated net worth of around 50 lakhs, with a considerable number of Instagram followers and higher engagement levels.

Alongside one’s lifestyle, people usually follow influencers with a physical personality. Khushi Karki is one of those influencers who not only has a charming core personality but also a slender physique. As a model, she has a lofty height of 5’6 feet and a weight of around 55-60 kg. Her eye color is a layered brown which not only compliments her face but also her black-hazelnut highlighted hair.

As per her Instagram feed, Khushi also loves getting tattooed and has a tattoo saying “angel” with a bird on her left collarbone area. Besides her classic model poses, She is also famous for her definitive makeup and trendy fashion taste making her a perfect influencer for the audience. She currently resides in Mumbai and is famously called Kay as a nickname.

Khushi is currently residing in Mumbai with her known-to-be boyfriend Kunal Tomar. Her audience and followers root for the couple as their reels together grab a lot of engagement on feeds. She is often seen posting Instagram pictures from her life in Mumbai, where she lives candidly amongst the beaches and finds solace in her otherwise fast lifestyle.

Khushi posts ranging content videos on her youtube handle, including vlogs, tasks, and her makeup and life routine or regimen. She also posts engaging youtube shorts that grab the audience’s attention and helps her make herself a brand.

As a social media influencer, Khushi is active on all her social media platforms, including Instagram and youtube. Her Instagram handle has a big community of 916k followers under the username @khushikarkiofficial. She posts her daily life pictures, brand collabs, product endorsements, and trendy and engaging reels on her Instagram.

She also manages a Youtube channel under the username @Khushi Karki and has a fan base of 372k subscribers. On her youtube channel, she posts various videos and pranks vlogs.

Khushi has also been spotted in music videos, web series, and short films. Her famous music videos were ‘think,’ ‘Naina mile,’’ Keh Na Sake,’ and ‘criminal song, ‘ which reached above million user engagements. When asked, she revealed she would be happy to work as an actor in the b-town. Searching for new faces in Bollywood films?, she is the one to watch.