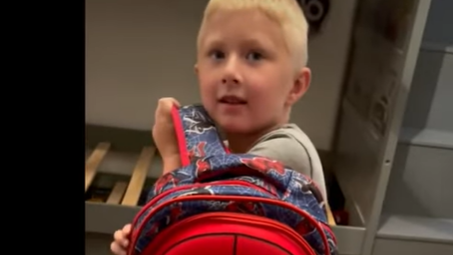 Recently, in the USA a video goes viral where a mother teaches her five-year-old son to protect himself from shooting. The video has received numerous likes on TikTok. Taking into consideration the report by CBS news, the son is seen using a bulletproof spiderman bag that he has used as a shield to protect him. This will help to save himself if a shooter attacks him on school premises.

The mother of the child, Cassie Walton, 22 years old and belongs to Oklahoma also taught her son some basic rules and regulations. She taught his son that if any day an incident takes place, he should be staying silent, and not utter a word until and unless the police arrive.

Since the USA has a history of gun violence, it was necessary to teach my son about shooting, says the mother. Taking into consideration the report of NPR, there have been twenty-seven shootings at schools in the USA. Severe incidents have taken place in Uvalde, Texas, in the month of May. This was the time when two teachers and 19 kids were gunned down by a teenager.

The mother also told CNN that because she wanted to teach her son about shooting safety precautions, she got him a bulletproof insert for his backpack. This decision was taken by her soon after the incident in Uvalde took place.

After the incident in Uvalde took place, her son was curious to know if any similar accident would take place in his school or not. “I tried my level best to answer his question, keeping in mind his age. This was when I decided to explain everything to him about the bulletproof backpack”, the mother says. He has complete knowledge about the stuff cops use to protect themselves in shooting cases.

The mother also says that her son is not at all scared of attending school. Nevertheless, she only decided to give him a backpack that keeps her son safe from such incidents. A number of parents praised Walton for the decision she took. They were also happy to know that Walton is a responsible parent and she did everything she could to protect her son.